Get out the running gear & enjoy nature
30 DAY RETURN POLICY
FREE DELIVERY FROM £991
FAQS & HELP HERE
Inflatable Tents: Inflate & go camping
Inflatable tents are ideal if you’re looking to keep your luggage as light and compact as possible. Large tents usually mean lots of heavy poles and an elaborate set-up. Fortunately, this isn’t the case with inflatable models, as they’re light, easy-to-handle and can be inflated in a very short time. This type of tent also offers impressive stability and protection from wind and weather. Like all other tents, inflatable models come with inner and outer tents that can be used accordingly, depending on the weather.
Carry on reading 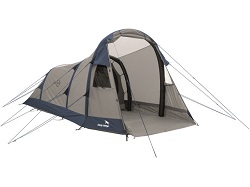 If you’re tired of spending too much of your camping trip struggling with bent tent poles and unwieldy designs, it may be time to switch to an inflatable tent. Inflatable tents use air-filled beams in place of tent poles, which allows you to pitch your tent in just as long as it takes to blow up the tubes. Here at addnature.co.uk,we carry a variety of inflatable tents for groups of all sizes so you can keep your camp setup simple and relaxing.

Why Use an Inflatable Tent?

While you can find inflatable tents in any size, the majority of these tents are designed to hold four or more people. That’s because large group tents are thetents that are notoriously difficult to pitch – so having an inflatable structure is more of an advantage the larger the tent you need.When choosing a tent for a large group, it’s a good idea to get a slightly bigger tent than you absolutely need. That way, everyone has plenty of space to be comfortable inside the tent and it’s never a problem to invite an extra person along for your trip.

Another thing to consider is whether the interior space of an inflatable tent is divided into two or more tent rooms. Having multiple tent rooms can add privacy, which is especially helpful when camping with children or with couples. Make surethat the tent rooms can be opened up to create a single large common space for playing games or evenings relaxing together inside the tent.

The best way to find an inflatable tent for your next camping trip is to shop our selection at addnature.co.uk. We carry a wide variety of inflatable tents for every group size and make it simple to find a tent that fits your needs.