This website uses cookies and pixel tags to improve its functionality and to provide you with personalised advertising, e.g. on social media platforms. Please see our privacy policy for more information – in particular; on how to prevent cookie setting and pixel tag tracking on your device in the future. I agree
30 day return policy
Free delivery from £991
50,000 items 500 brands 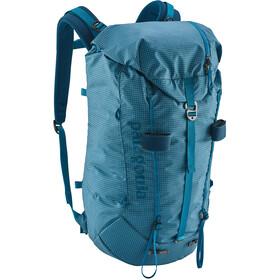 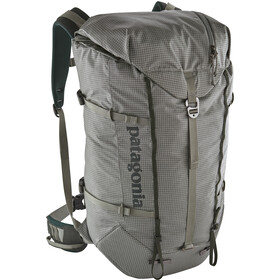 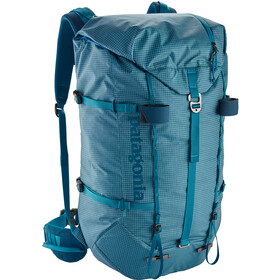 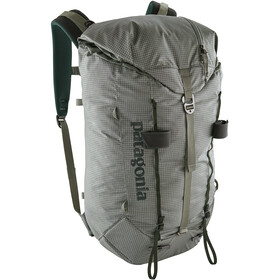 US-based Patagonia is a pioneer in developing backpacks and other highly specialised equipment for climbers. Where other climbing backpack manufacturers have opted for burly designs with tons of organisation, Patagonia is known for its minimalist packs. With a Patagonia climbing backpack, you can cut down weight on your approach and take on that multipitch climb you’ve been eyeing.

Patagonia takes a significantly different approach to climbing packs than many other companies. Notably, Patagonia’s emphasis is on minimalist, lightweight designs that can help you take on the longest single-day climbs. All of Patagonia’s climbing packs are made from rugged CORDURA nylon, which can handle the abrasion of a rock wall without requiring heavy fabric reinforcements. On top of that, you won’t find many organisational features or zippered pockets in Patagonia’s climbing packs – after all, these features add weight. Instead, look for a single large compartment with a simple closure that allows you to easily access all of your stuff on the wall. The back panel on Patagonia’s climbing packs is also notable. Most of Patagonia’s backpacks forgo an internal suspension frame in favour of a foam back panel. It’s just rigid enough to give the bag support, while also contouring to your back and significantly cutting down the overall weight you’re carrying. The shoulder straps and hip belts are similarly minimalist, providing just as much padding as you need to be comfortable without overdoing it. Many of Patagonia’s climbing packs also simplify opening and closing the main compartment by using a simple draw closure system. This can be easily cinched down to shrink the bag or loosened when you’ve overstuffed.

The single biggest difference among Patagonia’s climbing packs is how much gear they’re designed to hold. Backpacks around 30 litres in size are suitable for long single-day climbs, while packs that are 40 litres or more are suitable for an ultralight overnight trip. Keep in mind that you also might want to size up to a 40-litre pack if your day trip involves technical mountaineering gear, like ice axes or crampons.

Another thing that differs between Patagonia’s packs is whether or not they offer straps and lash points for carrying gear on the outside of the pack. Packs like the Ascensionist series have daisy chains on the outside for lashing down your helmet and protective gear, as well as loops for carrying your ice axe. Some of Patagonia’s climbing packs also offer straps that can be used for carrying skis. However, some Patagonia packs, like the Cragsmith, have a streamlined exterior that doesn’t leave you room to carry extra equipment.

Many outdoor shops don’t carry Patagonia climbing packs, so the easiest way to get one of these US-made packs is to explore our collection at addnature.co.uk. In addition to stocking Patagonia’s most popular climbing packs, we make it easy to find the right pack for you with simple product filters.

Need help?
Shut-down of phone service
More information
Newsletter
Sign up now and receive a voucher worth £5.3 Benefit from exclusive offers and deals.